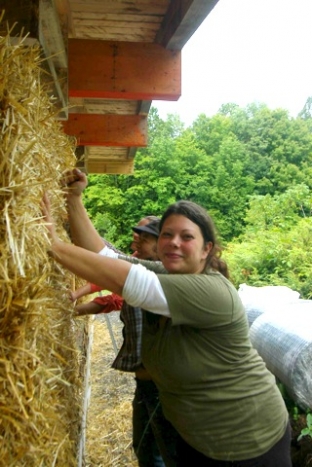 Workshops are a wonderful format for an exchange of ideas, a great place to learn new skills, and they offer the chance to work with your hands. One of the mandates of Shelter by Hand Inc. is to work as much as possible with our hands, using as many local resources as possible. Our workshops in the future will include timber frame, straw bale, natural wall systems, and plasters. There will also be a summer camp for kids in 2015, which will delve into natural building, paper making, printmaking and bookbinding.

Workshops are a lot of fun for participants and instructors alike.

Stay tuned for details for straw bale, plastering, and clay oven workshops for the summer and fall of 2017.

Michael Henry and Tina Therrien  are co-writing a book on natural plasters. This book will contain recipes from builders all over the world...and what better way to test the recipes than to plaster some real buildings. Plastering will take place on a couple of straw bale buildings, including a reciprocal frame roof cabin. They are planning a series of plaster workshops this summer to investigate these plaster recipes. Base coat plasters and finish coat plasters, earth and lime, will be covered in this series of workshops.

Michael Henry has been working as a natural plasterer for over a decade, with Ontario’s original straw bale construction company, Camel’s Back Construction, and also as an independent plasterer (http://naturalplaster.ca/). He is knowledgeable about base coat and finish coat systems for natural buildings, as well as veneer coats of earth and lime that can be applied over wallboard. He is an approved American Clay applicator; and he instructs in tadelakt plasters at the Endeavour Centre, and occasionally at Sir Sanford Fleming college. He sits on the board of the Ontario Natural Building Coalition.

Michael maintains a blog about sustainable building and natural plastering (http://thesustainablehome.net/) which has had 35,000 visits over the past year, and has been featured as a guest blogger on the Green Building Advisor.

He was the first author (originator and project manager) of Ontario’s Old-Growth Forests, a 232 page full-colour book that was published in 2010.

As co-owner of Camel’s Back Construction, Tina began her foray into the natural building world in 1997. Tina’s love of natural building and plasters have led her to France, Thailand and Haiti, where she has collaborated with local buiders in the development of appropriate natural plasters and building styles. Former chair of the Ontario Natural Building Coalition, and co-author of More Straw Bale Building, Tina has been active in the natural building movement in Ontario. She has done presentations at multiple Timber Framer’s Guild Conferences, and was a key organiser of the 2006 International Straw Bale Building Conference.

Tina continues working with natural materials in her new abode in Quebec, focusing more on timber frames with her partner in their new company, Shelter By Hand Inc. 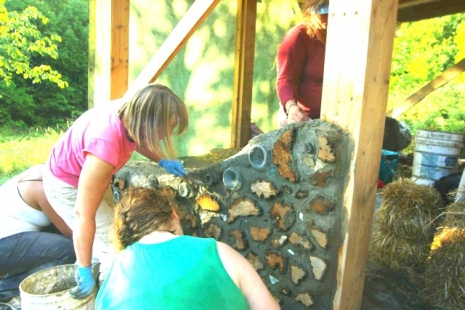