Homesteady was formed when Denis & Tina were asked to open for Wakefield band Tractor as a duet- they didn't have a name, but were in the midst of creating a blog on 'homesteady things', to write about their chickens, gardens, and tractors. With a love of old time and cajun music, this band emerged out of the dust at their homestead in Fieldville, Quebec.

Denis slaps a mighty fine bass, and also adds some guitar, vocals, and fiddle to the mix. Tina plays guitar, the washboard & triangle, and some bass, and contributes vocals. Tina & Denis are honoured to be joined by Peter Andrée, who has been playing accordion since he was a wee lad. Peter is well versed in cajun, québecois, and celtic music. James Stephens rounds things out with...everything. He plays a mean fiddle, adds sweet harmonies, and can pretty much play any instrument that's needed.

The newly formed Paugan Dames joined forces to play at the Wakefield Christmas market last December. Since then, the trio has decided to continue harmonising and playing when their busy schedules allow. Chris MacLean, Alise Marlane, and Tina Therrien make up the dames. Chris and Alise are both accomplished singer/songwriters, and Tina has had a love of choral singing and harmonies since she was in elementary school. 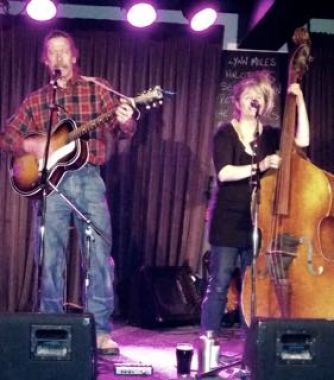